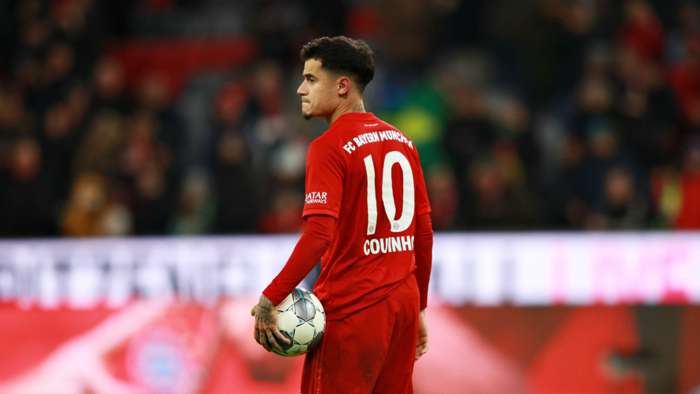 Leroy Sane will wear the number 10 shirt, previouslybelonging to Philippe Coutinho, when he plays for Bayern Munich next season.

Bayern completed the signing of Sane from Manchester City in a deal worth €49 million (£45m/$55m) on Friday, the Germany international putting pen to paper on a five-year contract.

When he is eligible to feature in 2020-21, Sanewill occupy the number worn by Coutinho during his season-long loan from Barcelona.

However, while advertising replica 'Sane 10' shirts for sale in their official club store, Bayern said: "Out of respect forPhilippe Coutinho, who is the current number 10 and could play in the upcoming DFB-Pokalfinal in Berlin and any games in the Champions League in August, Sanedecided not to use the number in his photos on Thursday."

The decision appears to suggest Coutinho is unlikely to remain at Bayern for the long term. The Brazil international has been linked with a host of clubs across Europe after the Bundesliga championslet their option to sign him permanently expire.

Bayern chairman Karl-Heinz Rummenigge has not ruled out moving again for Coutinho entirely, saying: "We'll see if he still has a role to play with us or not."

Manager Hansi Flick and captain Manuel Neuer were delighted to welcome Sane to Bayern on Friday but quickly turned their attention back to the DFB-Pokal final during the pre-matchj press conference.

Flick said of his new signing: "We're happy, but it's not the time to talk about it."

Captain Neuer was slightly more forthcoming when asked about his Germany team-mate Sane, but his primary focus is on lifting another trophy.

"I hope Sane can win the Pokal with Bayern in the future,"he said. "We Bayern players are happy that he will be with us next season."

Sane earlier posted on social media in a farewell message to Manchester City: “Thanks so much for the great time and all the support over the last 4 years. It has been a really intense and successful time which I surely won’t forget.

“We won many games, scored a ton of goals, broke a couple of records and celebrated 7 trophies together. Thanks to all the fans, to the staff and to my team-mates! I will always remember this time with great joy and pride.