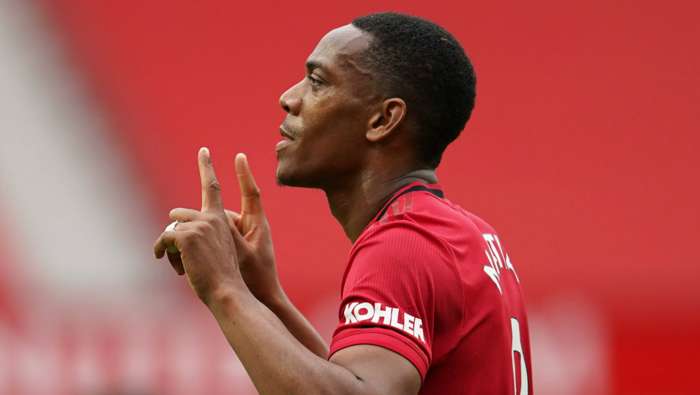 Ole Gunnar Solskjaer believes Anthony Martial settling into the number nine role has prompted his good run of form which has seen the Manchester United forward reach 20 goals for the season.

The Frenchman scored his first career hat-trick against Sheffield United last month and followed it up with a perfectly-struck strike against Bournemouth at the weekend, taking him to 15 Premier League goals this season.

It is already Martial’s best goalscoring season and United still have five league games remaining, an FA Cup semi-final and the Europa League to continue. And Solskjaer explained the secret behind unlocking the attacker'spotential.

“I think the team creating chances, Anthony working hard, being the number nine in a settled position, but also once in a while rotating with Marcus Rashford and switching positions,” Solskjaer said.

“For his goal (against Bournemouth), he started off on the left and curled it into the top corner.”

While Martial has been impressing, the spotlight has been on 18-year-old Mason Greenwood. He became the youngest United player since Wayne Rooney to reach 15 goals for a season after he scored a brace against Eddie Howe’s side.

The teenager has already been compared to the former United captain and Robin van Persie, and there has been ongoing debate as to whether the forward should be called up to Gareth Southgate’s England squad.

“So he could play for England's full team or Under-21s, I don't really mind. I know he's doing well for us and it's great to have him here.”

Whether or not Greenwood gets a call from Southgate, Solskjaer is confident the youngster will continue to improve and has been impressed with what he has seen from the academy graduate.

“He’sa naturally good finisher, so he'll always score goals,” Solskjaer explained. “He's a humble boy, he wants to learn, he listens, he's worked hard, you can see his fitness is getting better and better.