The All Reds! Klopp explains how lessons from New Zealand rugby union team can inspire Liverpool 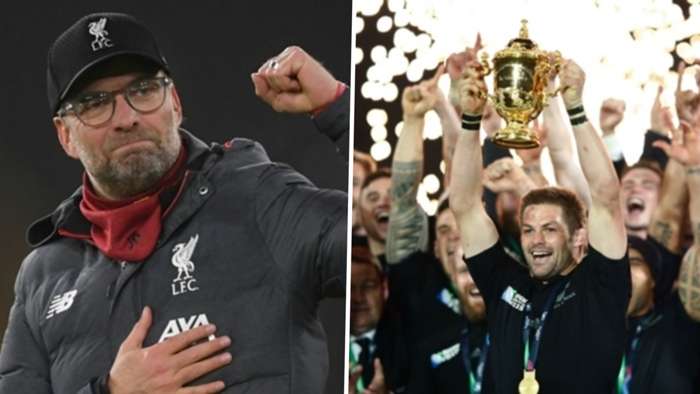 Jurgen Klopp has explained how lessons from the world’s most famous rugby union side have helped him throughout his managerial career.

The Liverpool boss revealed that, early in his spell in charge of Mainz, he had been struck by a documentary about the New Zealand All Blacks, which laid bare the desire, mentality and sacrifices taken by players who pulled on the famous jersey.

At a press conference to preview his side’s trip to Manchester City, Klopp spoke of how he had used that at Mainz, even making his players listen to the famous ‘Haka’ to get them pumped up before games.

“I think it was my first pre-season,” he explained. “And in the summer break I saw this documentary. I was completely impressed by these big fellas and how they spoke.

“At that time, the All Blacks were by far the best rugby team in the world, with a winning percentage of over 70 per cent. That’s so impressive.

“These boys, they worked as butchers, as builders, all that stuff, and all these guys spoke about their past and what it meant to them to play for this team.

“At Mainz, the last two minutes before the team bus arrived at the stadium for a game, we would always listen to the Haka, so that when the door opened it was pretty loud! It gave us just a little kick.

“They were the All Blacks, and at Mainz we made ourselves the All Reds! Nobody noticed that, because we were a small club, a small team. But for us it was big. That’s how it started for that team.

“I don’t know how much influence it had, but if you ask the players of that time, they really liked it. We were a team nobody is interested in, but we were really interested in ourselves!”

At Mainz, Klopp went on to earn promotion to the Bundesliga in 2004 – the first time in the club’s history they had reached the top flight.

Now, 16 years on, he is basking in the glory of guiding Liverpool to their first league title since 1990.

But at Melwood on Wednesday afternoon, he promised the Reds would, like the All Blacks, refuse to rest on their laurels and would continue to hunt further success.

"I have learned that when you think you have reached the pinnacle you are already on the way down,” he said.

"We don't feel that. I don't feel satisfied. This is just another step, a big one, an unbelievably big one, but it's not the only thing I want to talk to the boys about when I meet them in 20 years' time.

"As long as you wear the shirt, less than 100 per cent is never allowed. That's not my phrase. I kept that for myself from the All Blacks documentary.

“And that's for each LFC player and for me. That's what we try to live.”