The world's best free agent? Willian proving worth to Chelsea, Tottenham and Arsenal 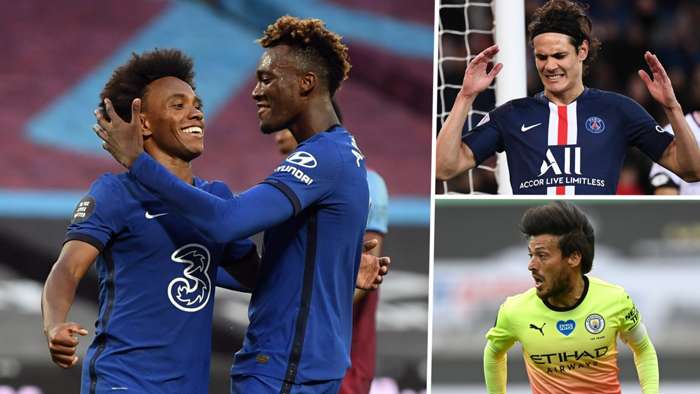 "If you were to view social media," Chelsea boss Frank Lampard mused earlier this week, "you'd never pick a team."

And certainly not one featuring Willian.

The Brazilian has long been a preferred target of the keyboard warriors among Chelsea's fan base.

Willian may have bagged a double against West Ham on Wednesday, thus becoming the first player in Premier League history to net in every month of the year, but some supporters were quick to point out that the winger hadn't scored twice in the same game since October 2015.

Willian has certainly struggled for consistency at certain points during his Chelsea career but, this season, he has proven one of Lampard's most reliable performers.

The 31-year-old has also emerged as a hugely influential figure in a dressing room filled with young and inexperienced players.

"I get to see what the players are like, how they train day to day," Lampard explained, "so when you make a selection, people on the outside will make certain comments because they don't see what I see.

"But I attach a huge value to how players behave and work in training during the week.

"And I've always known that Willian had a great attitude as a player because I've played with him.

"I think we've also all seen it on the pitch this year, with his work ethic off the ball.

"So, I think, in general, Chelsea fans hold him in real high regard.

"It's difficult in the modern era to get away from social media, and what people are saying all over the world.

"But I think people who are at the club know the value of him."

There are plenty of people outside the club, though, who are fully aware of Willian's value.

Indeed, right now, with no contract resolution reached and his terms due to expire at the end of the season, there is no better free agent on the transfer market. Thatis saying something, given Jan Vertonghen, Thiago Silva, David Silva, Edinson Cavani andRyan Fraser are all available for no fee this summer.

Both Arsenal and Tottenham are particularly keen on signing a player who is settled in London and presently enjoying one of the best campaigns of his career to date.

Willian has already matched his best-ever Premier League haul of eight goals and he is the only player other than striker Tammy Abraham (15) to have reached double figures (10) in all competitions this season.

Chelsea have certainly missed Eden Hazard from an attacking perspective in 2019-20 but Willian has done an admirable job trying to fill the creative void left behind by the Belgian, who joined Real Madrid last summer.

Willian has more assists (seven) than any other Chelsea player, while he also ranks first for chances created, with 85. That is25 more than second-placed Mason Mount.

This all begs the question: why did Chelsea only extend Willian's contract, which was due to expire on June 30, until the end of the season?

The answer is that the Blues would like the Selecao star to stay at Stamford Bridge but the issue is the length of the deal on offer.

Willian is seeking a new, three-year contract and the club is reluctant to hand such a lengthy extension to a player the wrong side of 30.Talks, however, over a deal have now resumed.

"I haven’t given up hope on it," Lampard said. "The club is still in discussions with him. We want him to stay at the club. But I also appreciate the fact that this contract for Willian is a big deal for him because of his age and where he’s at. I’ve been there before myself and I respect that.

"But the way he’s playing at the minute shows his worth to the squad and the group and it’s something that I hope we can get to. Whatever way with Willian he’s been a great servant to the club and if we can get it I will be happy. If not I will certainly wish him well because I’ve got a lot of time for him as a player.

"In the short-term we can see what he’s doing for us. It’s ongoing."

Of course, Chelsea have softened their stance on this matter of late – signing the 31-year-old Olivier Giroud on an 18-month deal from Arsenal was actually quite a significant move.

However, the Blues were originally only willing to offer Willian an extension until 2022, particularly as they have already strengthened their attack for next season with the addition of Timo Werner and Hakim Ziyech.

Competition for places in Lampard's starting line-up is, therefore, set to intensify, especially when one also considers that Christian Pulisic is blossoming into an excellent Premier League player and Callum Hudson-Odoi remains a young talent of enormous potential.

With the squad so well stacked up front – and remember, Chelsea could yet land another attacker, such as Kai Havertz – it's hardly surprising that the fans are calling for defensive reinforcements after the disappointing 3-2 loss at West Ham in midweek.

But it is Willian who is arguably playing the biggest role in Chelsea's push for a top-four finish in the Premier League. While he may be renowned as a reserved character, it was Willian who issued a rally cry after the setback at the London Stadium.

"It’s not a time to complain. We have to win on Saturday against Watford," he declared.

"We have to play every game as a final, and fight to get into the Champions League places. We deserve to finish in the top four.

"Sometimes we have gone up and down, but I think we deserve to be there and we have to keep that position."

Willian's form will be key in that regard.

Some fans on social media would be happy to see him leave at the end of the season but Lampard certainly wouldn't.

The Blues boss is well aware of veteran's value – and Tottenham and Arsenal are too.