The rejuvenation of Man Utd flop Moyes at West Ham 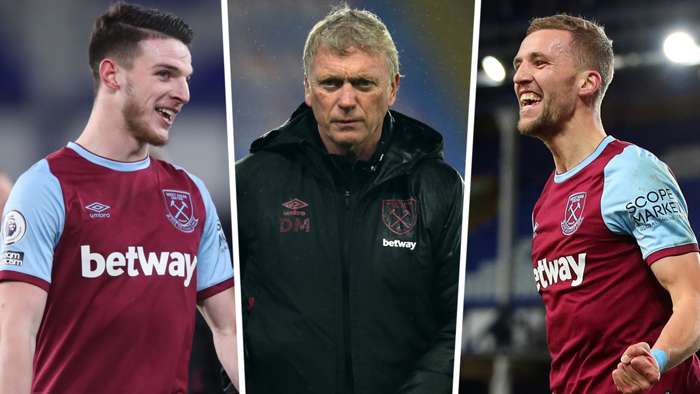 Back in autumn, when the 2020-21 Premier League season was refusing to take shape, when chaos reigned and baffling scorelines captured the nation’s mid-pandemic cabin fever, it briefly looked as though Jose Mourinho’s Tottenham would win the title.

Pressing intensity plummeted and the more expansive possession sides got hit harder than the rest, with huge gaps appearing between and behind the jaded players at Liverpool and Manchester City.

But more than that, a lack of time on the training field meant the automatisms and ultra-detailed tactical battle plans collapsed, taking the Premier League back to a simpler, pre-modern time.

And if the division had regressed by 10years or more, who better for this unique campaign than Mourinho, a man whose conservative tactics were peaking in the mid-2000s?

That prediction was proved emphatically wrong, of course, but the theory still holds up thanks to the work of David Moyes at West Ham United. It is no coincidence that the last time Moyes finished in the top four was the same year Mourinho won his first league title at Chelsea.

An atavistic Premier League is ideal for the defence-first pragmatist, for the tactician who minimises risk and requires none of the exhausting pressing or intricately trained attacking patterns for his ideas to get across.

This is the basis of the Moyes approach, and while it would be inaccurate to say he has not evolved and adapted since his heyday at Everton (the fact Mourinho has not, and is suffering the consequences, speaks volumes), the basic principles are the same.

In the Covid-19 season, it is the perfect system.

In the vast majority of matches, West Ham do not press, but rather sit in a mid-to-low block and only engage the opposition in their own third (only teams in the bottom four have a lower possession average than West Ham’s 43.7 per cent).

This allows them to shuffle across in a compressed unit that requires little risk and little day-to-day coaching, protecting West Ham from the chaos of this endless and exhausting campaign.

The basis of their success in this regard is Declan Rice and Tomas Soucek, two intelligent defensive powerhouses who manage to cover huge amounts of space in the middle of the park.

The composure both players show ensures that nothing can get through the West Ham blockade, regularly reducing opponents to harmless possession down the flanks. It is arguably the best midfield partnership in the division.

Soucek, in particular, has been dominant, not only making more headers (270) and more fouls (44) than any other player in the Premier League, but chipping in with eight goals too.

In fact, both he and Rice are important in instigating the West Ham counter-attacks either with direct dribbles through the thirds or sharp, incisive, one-touch distribution under pressure into the West Ham forwards.

Moyes’ counter-attacks are also relatively simple, built through the midfield and into Jarrod Bowen or Pablo Fornals as they drift off the flank.

However, it is rare for West Ham to score directly from a break, and instead the plan tends to be to get Michail Antonio in behind to win set-pieces. Antonio is equally adept at holding up the ball with his back to goal and using his pace in the channels–both lead to dangerous dead-ball scenarios.

West Ham top the charts for non-penalty set-piece goals (12), with Aaron Cresswell’s delivery making him the fourth-most frequent crosser from the left wing in the division (4.33 per game) and putting him fifth in the assist charts, with five.

Their success is essentially down to that conservative defensive shape and goalscoring potential from set-pieces, and yet Moyes deserves credit for his flexibility, because despite the tactical strategy remaining the same numerous tweaks have been made throughout the season.

The idea of Moyes as a tactical dinosauriswide of the mark.

West Ham began the season in a 3-4-3 formation, with Cresswell often overlapping from centre-back in perhaps the starkest example of Moyes moving with the times, and, after a brief hiccup, he switched to a 4-2-3-1 without losing any of the defensive resilience.

Moyes even went with a fluid 3-6-0 in the recent 3-0 defeat of Sheffield United, while adjustments are regularly made to counteract specific opposition threats.

But no matter the shape, West Ham remain firmly a team in the Moyes mould of safety-first, old-school football. The flashier players have all been sold or sidelined, and in their place West Ham fans can trust consistent, hard-workingand powerful players working in a simplified rhythm.

And trust is a big issue at West Ham. The supporters and players clearly needed a break from each otherand, thankfully, the damage of an often toxic atmosphere at the London Stadium has been largely repaired.

West Ham have used the empty stadium to reset not just their tactical system but their image as a club and their relationship with the fan base. By the time supporters are back in their seats, they may even be watching Champions League football. For that, they would have onlyone man to thank.