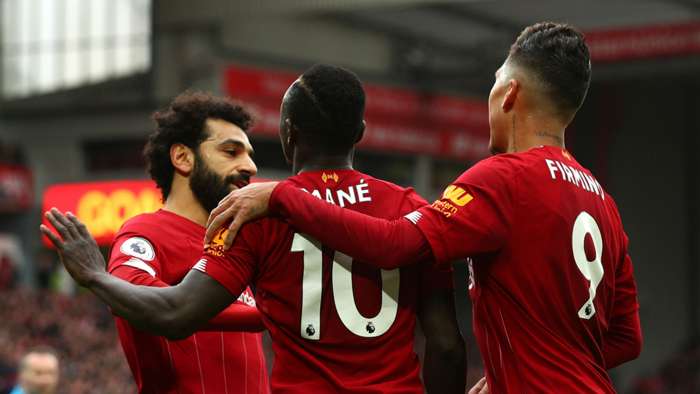 Liverpool may regret not buying another striker to act as back-up to their established front three, says former Reds skipper Graeme Souness.

The newly-crowned Premier League champions have one of the most fearsome forward lines in world football, with Mohamed Salah, Roberto Firmino and Sadio Mane plundering 50goals and registering 28assists between them this season.

Souness, though, fears the Merseysiders’ attacking threat is significantly blunted when one or more of the trio are missing, with those in reserve not up to the required standard.

Divock Origi is regularly utilised as a back-up option and the Belgium striker was given a rare chance from the start against Aston Villa on Sunday, with Firmino dropping to the bench.

However, Origi struggled to make much of an impact before being substituted for Firmino after an hour, with the Reds opening the scoring through Mane 10 minutes later before Salah set up substitute Curtis Jones to seal the victory late on.

Liverpool were heavily linked with a move for Timo Werner before deciding to droptheir interest, which cleared the way for Chelsea to sign the RB Leipzig striker.

Souness fears Liverpool may regret that decision and thinks they should be looking to bolster their forward line ahead of their title defence next season.

“I’ve been in this situation where you just drop that intensity by just one or two per cent,” Souness told Sky Sports.

“Liverpool obviously have said before the game ‘let's get the tempo up, let’s try and be sharp, let's get back to our normal game’. From the back they are snapping it around, but there’s just that extra yard that’s missingin the final third.

“Given Liverpool are world champions, they have won the Champions League and now the Premier League, I’m disappointed they are not buying another striker.

“Because when you don’t play one of that front three, going to Origi it is a fair drop in quality and they might live to regret that.

“I’m hope I’m wrong and they end up buying someone to fill that gap when one of those three don’t play.

“But that’s what you’re seeing tonight. Firmino links everything from back to front and they are missing that.”