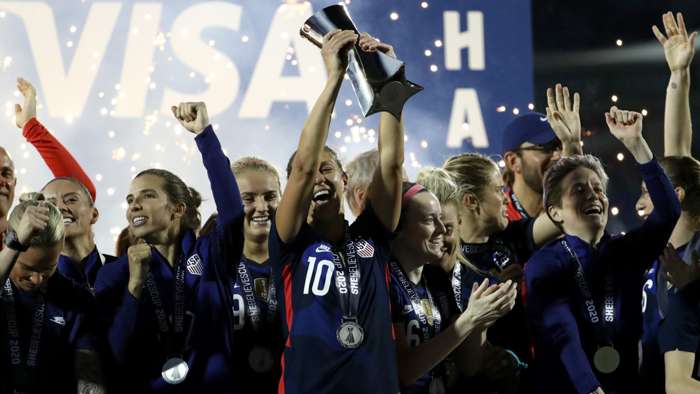 U.S. Soccer has announced that the U.S. women's national team will host the 2021 SheBelieves Cup in Orlando next month.

With the USWNT currently holding its January training camp beforetwo friendlies against Colombia in Orlando, Vlatko Andonovski's team is now set to begin 2021 with five straight matches at Exploria Stadium.

The SheBelieves Cup, which has often featured some of the world's top teams, was first held in 2016 and has been won by the USWNT on three of five occasions.

The USWNT won the most recent edition in 2020, defeating England, Spain and Japan in the round-robin tournament.

Following the 2020 SheBelieves Cup, the USWNT went on an extended hiatus due to the coronavirus pandemic.

The USWNT had no team activities between the end of the tournament in March and October, when the team held a training camp in Denver.Andonovski's side returned to the pitch in November with a friendly victory at the Netherlands.

This year's edition of the SheBelieves Cup will feature four top-10 teams in FIFA's most recent rankings, with the U.S. occupying top spot, Canada and Brazil tied for eighth, and Japan in 10th.

“I can’t wait for this tournament and I know our players feel the same way,”Andonovski said in a federation release.

“We put in all this work to play matches, so to get three great ones in this world-class event that resembles group play at an Olympics is something we’re very thankful for. It will be a bit different this year with limited fans, but with the Olympics once again on the horizon our players will be highly motivated and there’s no better way to prepare for the tournament than to play teams that will be in Japan.

"There’s some great history between these countries and I know all six games will be fun to play in and to watch.”