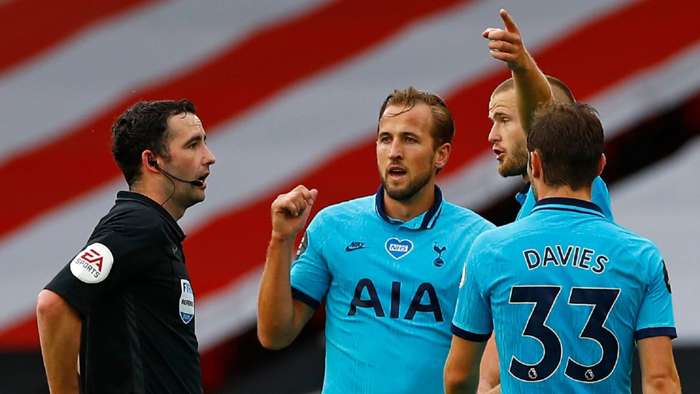 Ex-Tottenham star Jamie Redknapp has expressed his belief that "VAR is ruining football" after seeing a Harry Kane goal against Sheffield United disallowed due to Lucas Moura's alleged handball in the build-up.

Spurs travelled to Bramall Lane on Thursday to take on the Blades in a must-win encounter, buoyed after a 2-0 victory against West Ham last time out.

However, they found themselves 1-0 down after a tight opening 30 minutes, with Sander Berge making the breakthrough with a neat finish past Hugo Lloris in the Tottenham net.

Jose Mourinho's men responded quickly, and thought they had levelled the scores when Kane found the net following a mazy run from Moura in midfield.

Unfortunately for the visitors, the England international's effort was chalked off after a VAR review, with Moura adjudged to have handled the ball as he went down under a challenge just outside the box.

Replays showed that the Brazilian wasn't even looking at the ball, which seemed to deflect off his back rather than his arm, but referee Michael Oliver called for play to resume from a goal kick rather than the centre circle.

Redknapp was fuming with the decision at half-time, and insisted that changes must be made to reduce the number of frustrating technology-related incidents in the Premier League.

The former Tottenham midfielder said: “This is one of the worst decisions I’ve ever seen, I can honestly say, since VAR was introduced,” he said,speaking as a pundit on Sky Sports. “I get the letter of the law but we have to show common sense.

"A player’s Moura been fouled. When you fall over you have to put your arms out to protect yourself. He’s been fouled by three players there, you can see it’s an obvious foul. Theball then ricochets on to his arm, it falls to harry Kane who obviously finishes pretty well.