When are the USWNT fixtures in 2021? U.S. team match schedule 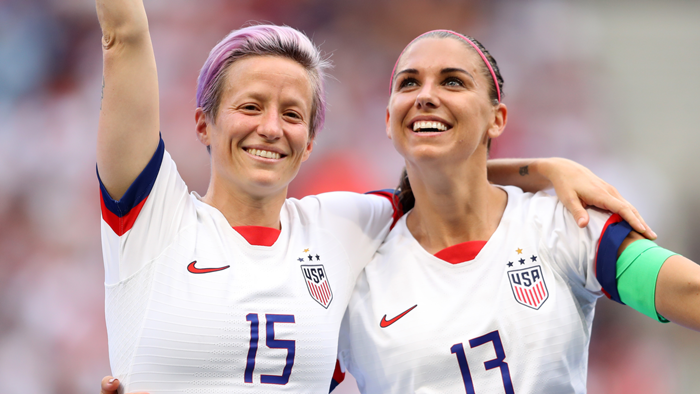 The U.S. Women’s National Team are targeting gold at this summer’s Olympic Games and will hope to prepare accordingly for the tournament as international football begins in 2021.

Back in 2016, Jill Ellis’ side were eliminated in the quarter-finals by a Sweden teamled by former USWNT head coach Pia Sundhage.

However, after winning their second successive World Cup title last summer, the United States, with Vlatko Andonovski in charge this time around, will be the favourites this summer as they aim for their fifth Olympic gold.

The Covid-19 pandemic cancelled a significant amount of international football in 2020, with the USWNT only returning to action at the end of the year with a 2-0 win over the Netherlands in November.

It was their first outing since March last year, when they beat Japan 3-1 to clinch the 2020 SheBelieves Cup title.

The outbreak of coronavirus meant fixtures against Australia and Brazil, which were scheduled for April 10 and April 14, respectively, had to be cancelled.

However, Andonovski’s team already have two fixtures scheduled for January to conclude a 20-day training camp.

There are three further international windows for games to take place before this summer’s Olympics.

The window which runs from February 15 to February 24 will include the 2021 edition of the SheBelieves Cup, a tournament that has been hosted in the United States every year since 2016.

The USWNT’s opponents this year are yet to be confirmed, with England, who have played at every edition and won the tournament in 2019, having already announced they will not be attending.

France, who have been part of the tournament on three occasions and won the title back in 2017, hosted their own competition in 2020 too, the Tournoi de France.

There are then further international windows in April (5-13) and June (7-16) before the Women's Olympic Football Tournament gets underway in Tokyo, Japan, on July 21.

The USWNT will learn their group stage opponents for the Olympic Games later this year, with all qualified teams not yet confirmed due to the impact of coronavirus.

The final line-up will be learned at the end of February, with a two-legged play-off between South Korea and China to decide the final AFC spot, while Cameroon and Chile will also face off in a two-legged CAF-CONMEBOL play-off.

Following the conclusion of the Olympics Games, the USWNT will reconvene between September 13 and 21, October 18 and 26 and November 22 and December 1.

There will be no qualifying games for the 2023 Women's World Cup to contest with for Andonovski's team this year, as the Concacaf representatives at that tournament will be determined in 2022, via the Concacaf Women's Championship.