With Bailly back to his best, have Man Utd found their ideal centre-back partnership? 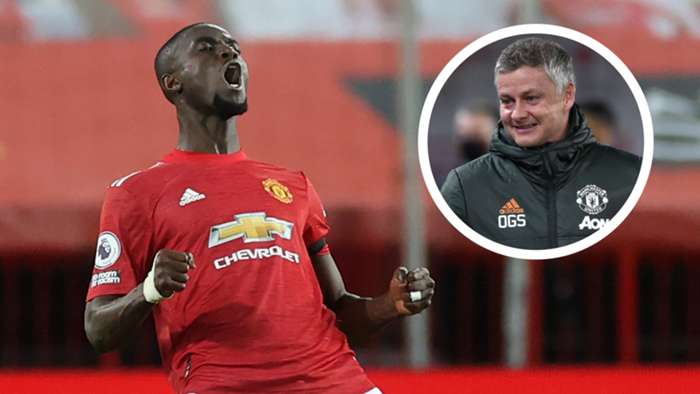 As the final whistle went at Old Trafford on Friday,Eric Bailly was mobbed by his Manchester United team-mates.

But as Bailly slumped to his knees in celebration, it was also clear that the former Villarreal man was keen to bask in a moment of personal satisfaction after a run of terrible luck during his time at United.

It is fair to say it hasbeen a struggle for the Ivory Coast international over the past few seasons, with injuries having prevented him from having any chance tostringtogether a decent run of form.

The clash with Villa marked Bailly'sfourth successive start for the United first-team;a feat that he had not previously managed since September 2017.

“He’s got a style of play that’s caused him to be injured a few times, and muscle fibres have caused injuries sometimes too,” United manager Ole Gunnar Solskjaersaid after the 2-1 win over Villa.

“You can see how much it means to him, but also for the rest of the boys at the end of the game. He’s such a well-liked player and man in the dressing room. Everyone wants him to do well, they know the struggles he’s had and we’re delighted for him.”

It isnot just Bailly'spersonality that has earned him fans inside the United dressing room, though.

If the 26-year-oldkeeps putting in the level of performance he has over the festive period, thenSolskjaer is going to find it difficult to leave him out, even with Victor Lindelof now fit to return from his latest stint out with arecurring back injury.

One of Bailly’s key attributes, and something that has been lacking from United’s back line in recent years, is his pace.

When partneringHarry Maguire andLindelof in defence, Solskjaer’s side have beenexposed against teams who liketo use speed and hit them on the counterattack.

It is precisely those kind of attacksthat Bailly excels in stopping, and given Maguire's physicality and leadership skills, the pair complimentone another well.

Bailly is alsofar more comfortable playing out from the back and bringing the ball forward than some of his defensive colleagues, withone of his drives forward on Friday having sparked anattack which was only shut down in the Villa penalty areaby Matty Cash.

The key for Bailly now is to stay fit, which given his injury record is likelyto be easier said than done.

“Now you need to make your head calm, train and keep going, getting ready to help the team. That’s my first mission and I hope I don’t get injured again,"Bailly told the United website."The injuries are very difficult for players when they have the good form. It’s very important to be ready to play every game,”

“That playing regularly is very important for me, as beforeI’d had moments, difficult moments, but now I’ve come back into the team. I am feeling good, train well andI’ll be ready to help the team. I am fit and I want to play.”

There has been no doubting Bailly’s desire to help the United cause,but if Solskjaer is to remove a centre-back fromhis transfer wish list, then the Ivorian is going to have to stay fit and prove why he can be a better option than any potential new arrival.

“My only issue with Eric Bailly has always been his fitness, he can never stay fit,” ex-United defender Rio Ferdinand said on his YouTube channel,FIVE.

"Bailly has good attributes, he’s quick and aggressive. If he can cut the silly mistakes outwhich he had previously and gets away from injuries and gets a clean bill of health, I think Manchester United are onto a good thing."

Just how much of a good thing remains to be seen. Butshould Baillybe selected for his fifth successive gameagainst Manchester City in the Carabao Cupsemi-final, then it will prove he truly is trusted by Solskjaer ahead of what would be his toughest test of the season so far.

“You never know what kind of system he's Pep Guardiola going to come up with, but you know you've got to defend really well against Man City,” Solskjaer said ahead of the meeting at Old Trafford.

“It's hard to keep the ball in their half, they find a way of overloading, so you’ve got to be brave, compact andtrust your players.”

Lindelof has been confirmed as being back fit again, so it will be interesting to see whether Solskjaer sticks with his new centre-back partnership -who have conceded just three goals in their four outings together either side of the new year -or whether he reverts to what has been his preferred pairing over the past two campaigns.