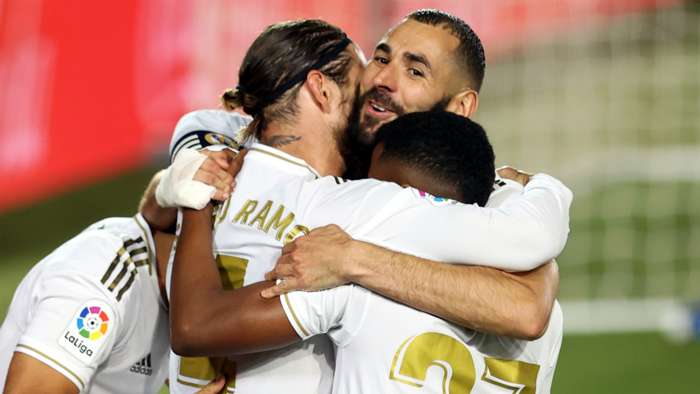 Zinedine Zidane said he was "proud" of his Real Madrid players after coming through a tough test against Getafe, while insisting "without suffering you cannot achieve anything".

Sergio Ramos was the hero, scoring the only goal from the penalty spot in the 79th minute as the La Liga leaders earned a1-0 home win on Thursday night.

The victory was Madrid's sixth in a row as they extended their advantage over stuttering defending champions Barca to four points with five matches remaining.

Zidane heaped praise upon his squad post-match, but refused to start getting carried away with their position in the league standings.

"We had to win yes but nothing more. For us nothing changes. We have five finals left.

"We have not won anything. I know what this is like and until this is over, we cannot say anything.

"We have to keep working. We are happy, proud of the team ... the effort, the solidity that we show, is very good.

"This is football, football every three days is a new story. Today we suffered a lot, the other day against Espanyol too.

"We played against the bottom team, but they always make it difficult for you. Without suffering you cannot achieve anything."

Zidane, whose in-form Madrid side travel to Athletic Bilbao on Sunday, added: "We knew that we would suffer a lot. They pressed very high, it has cost us a little, but it is normal.

"I think that with patience it was known that the goal could be reached. It is what we did, have peace of mind, because these are key moments You have to congratulate the players because it has not been easy, physically or mentally."