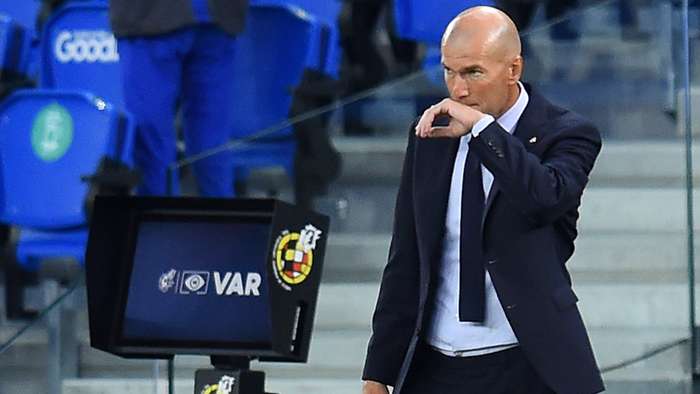 Zinedine Zidane feels his Real Madrid players deserve more respect as he is "tired" of their victories being attributed to refereeing decisions.

Madrid celebrated a seventh straight win on Sunday as they prevailed 1-0 at Athletic Club, moving seven points clear of rivals Barcelona at the top of La Liga.

However, their goal came courtesy of a Sergio Ramos penalty, awarded only after a VAR review highlighted Dani Garcia's trip on Marcelo.

Iker Muniain revealed his frustration at the call after the match, echoing comments from Barca's Gerard Pique, who suggested the officials were making it difficult to stop Madrid winning the title.

Zidane bristled at the accusations, though, telling a news conference: "I am tired of being told that we won because of the referees.

"This is not going to change. But the players deserve respect. Nothing is going to take away from our goal."

The head coach accepted Madrid were not at their best at San Mames, yet he pointed to a tough schedule which saw the leaders in action against Getafe as recently as Thursday.

"Our strength is what I like the most. We are showing our strength and our balance when we lose the ball," Zidane said. "We are doing very well.

"We have lacked brilliance in attack and we can improve, but most important is our defensive strength.

"The problems in attack are due to a little bit of everything. It can be something physical, too. We play every three days.

"But I don't think it is our own thing; I think it is something for all the teams. There is a lot of difference between the beginning and the end."

Talk is turning towards when Madrid might clinch the title, with just fourgames to play and Barca struggling for form.

But Zidane is not getting ahead of himself, adding: "Until it is mathematically won, we cannot relax and think about the title.

"We have shown our strength and our solidity, but I am not going to talk about it, even if you ask me every day, because I already have a lot of experience in my career, also as a player, and all the games are difficult.