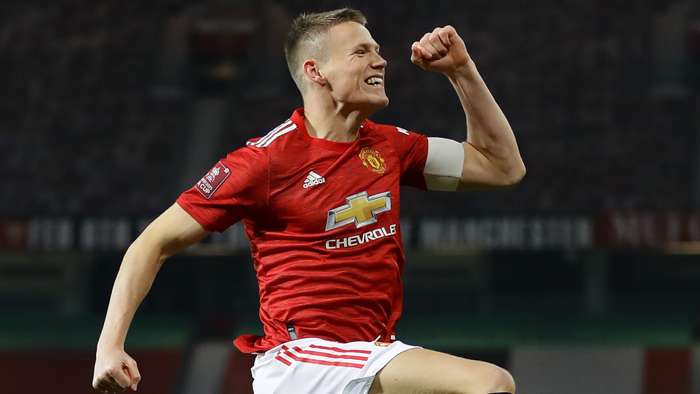 Scott McTominay has revealed how he learned of the decision to pass Manchester United’s captaincy in his direction, with the midfielder considering that call to have been “a test”.

Having been asked to lead from the front, McTominay ended up grabbing the only goal of the game in that contest.

The 24-year-old hopes to have shown that he can be a leader, with questions having been asked this season of whether Ole Gunnar Solskjaer has enough of those players at his disposal.

Quizzed by United Review on how his manager informed him that he would be skippering the side against the Hornets, McTominay said: “He didn’t really say much. He just said ‘captain tomorrow’ and looked at me. I just smiled; I didn’t want to let off too much emotion but I was so, so pleased.

“For the manager, I presume every decision he makes with me and other players is a test. It’s not just ‘oh I’ll give him the captaincy for no reason’, it’s a test. Everything in life is a test and you have to pass those tests.

“It’s important to really show people that you can be an example at this football club and not let things go to your head.

“With something like the captaincy, it would be easy to then start doing things differently and shouting and screaming and not playing how you normally would, but that doesn’t make any difference to me.

“Whenever I’m on the pitch with H Harry Maguire I feel like there are 11 captains on the pitch who need to be vocal and leaders as well.”

McTominay has passed the 100-appearance mark for United in the current campaign and hopes his game can be taken to even greater heights in the months and years to come as he seeks to prove his worth under the brightest of spotlights.

“I think every game is a chance to improve. Every game at this football club is hugely scrutinised in every detail,”the Scotland international added.

“For me, it’s about doing my best every time I play and wanting to improve all the time and working with the manager and the coaches.

“That’s about it for me, I don’t really dive too much into form and different things like that. If the team is winning and you’re consistently playing to the best of your ability and you’re always looking to improve, then that’s a good season for me in terms of numbers and statistics.

“That ‘eye’ test is the best form of judging football players and just forgetting statistics.

“I can’t remember many games when there hasn’t been 11 players who haven’t played well and it’s about improving on that.”