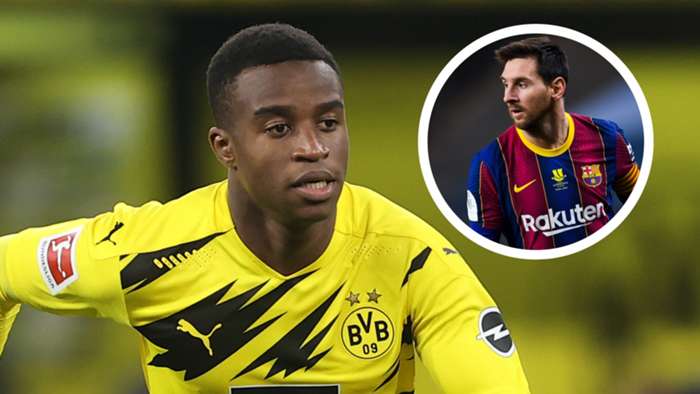 Youssoufa Moukoko grew up idolising Barcelona superstar Lionel Messi, the 16-year-old’s brother has revealed, with the Borussia Dortmund starletbeing backed to ignore the hype he is generating and create his own legacy in the global game.

Records have tumbled around him since linking up with Dortmund in 2016, with Lucien Favre offering up a senior debut in November 2020 after DFB age restrictions were changed and 16 year olds cleared to compete in the Bundesliga.

Moukoko is now the youngest player to grace that stage, and to score on it, while he holds a similar entry in the history books when it comes to Champions League competition.

Big things are expected of the teenager from this point, with his brother Borel – who is currently turning out in the fifth tier of German football – admitting that a hot prospect is living a boyhood dream by following in the footsteps of his idols.

“I liked to watch Barcelona, Real Madrid, Liverpool and Bayern and see how the players behaved so that I could learn as much as possible from them,” Borel Moukoko toldGoal and DAZN.

“Youssoufa has alwaysliked Lionel Messi. We also often watched the games from the top European leagues or the Champions League together. That was always wonderful.

“In Africa, it is rare for people to sit at home alone in front of the television and watch football. Most people go to a bar and watch together. Sometimes 100 people come together to watch top matches in the Champions League.

“You don't have to order anything, you can just sit there and watch the game. When a goal is scored, many people go absolutely crazy and are happy for the clubs they support.”

Moukoko’s big break at Dortmund has come with coronavirus restrictions still in place, with his family being prevented from catching him in live action.

That situation will change, though, and there is the promise of a shooting star soaring even higher by the time supporters are allowed back into stadiums en masse.

Many will be eager to catch a glimpse of Moukoko, given all that he has achieved to this point, but his sibling is confident that an ambitious performer will not get swept up in the furore he continues to generate.

Borel added: “Unfortunately, one cannot influence what is written in the media. Especially since Youssoufa's story was and is simply extraordinary.

“The media have to write it down and report it. What should he do about it? Score fewer goals? When you're as good as he is at something, people just talk about you, there's no changing that.

“We have always supported him as a family but also motivated him to stay hungry and not rest on his early successes.

“The hype around him, or at that time the discussion about his age, did not interest him much. Above all, none of this has distracted him from his path - and that is the most important thing.”