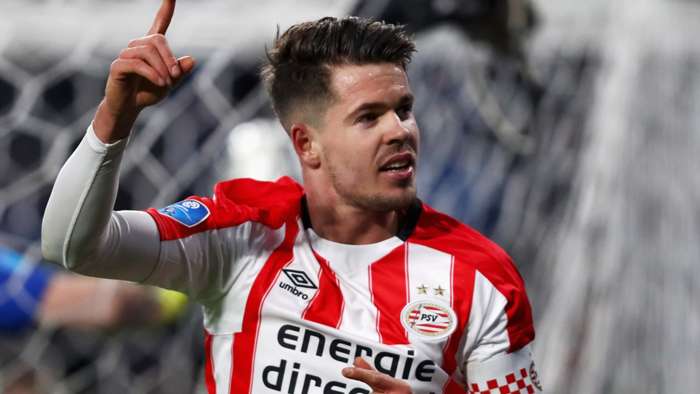 Having scored 14 goals in 28 league games on loan at PSV during the previous campaign, the midfielder was clearly entering his prime ahead of his 26th birthday.

But after picking up an infection during the original operation, there was a time when the Netherlands international wondered whether he would ever play again.

He was forced to undergo three surgeries in the space of six days before spendingthree months on antibiotics, during which he went under the knife another three times for minor procedures.

"The danger was there that I wouldlose my career, of course," Van Ginkel tells Goalin an exclusive interview. "Especially after the first week of infection, they didn't know what the infection was doing inside the joint.

"After three monthsI reacted well, but it was going to be a tough, tough time to be at the top level again, to come back and play for PSV, Chelsea or whoever. At that moment, it was more about whether I couldI walk again. Football didn't matter.

"The infection that came six weeks after my operation killed my knee a bit. That's why it took so long, it damaged my knee and cruciate and I had to be operated on all over again. It was a very hard time.

"It was explained to me that these things could happen sometimes, but only toone in 200 people after surgery. It is very unlikely you get it, but some get an infection.I was one of them and it was quite bad.

"A normal infection requires onlyantibiotics and you are OK, but mine was quite bad so I was on antibiotics for three months. They had to clean my knee out a further three times through surgery. Those were very tough times.

"Emotionally and mentally, it was very hard. But I am a very positive person. I think everyone who knows me would say that and it kept me alive, for sure. But I can't deny that I had some difficult days."

Having signed for Chelsea way back in 2013 from Vitesse, he has played only four times in total for the Blues. Throughout his time at the club, he has variously been out on loan at PSV, Stoke and AC Milan.

And Van Ginkel certainly had plenty of time to think things over while considering his own bad luck.

The 28-year-old went 983 days between stepping out on the pitch on a matchday, spending a lot of his time recovering at Chelsea's Cobham training ground alongside the likes of Callum Hudson-Odoi, Reece James and Ruben Loftus-Cheek as they recovered from their own surgeries.

The former AC Milan loanee also invested in real estate and announced his engagement to his long-term girlfriend, Kristie,before marking his return to action in January when coming on for PSV against AZ.

"It felt a bit like my debut again," he admits. "We lost the game but I still celebrated it with my family. It felt important because it was a big achievement for me."

Though he only played the final 10 minutes at the Philips Stadion, he has since made two further appearances for Roger Schmidt's side as he aims to get his career back on track after hiscontract at Stamford Bridge was extended through until the end of this season back in June.

"My focus is just on PSV at the moment and the rest, we will see," he says when asked about whether he could yet return to the Chelsea and Netherlands fold. "If I can get back to my level, then I know my qualities, but it is just focusing on PSV and myself at the moment. I want some more minutes in the next few games.

"The mindset you need to make it is the same that you need to come back. It is to get better every day and I did it. If you don't have that, you will never come back after a big, big injury.