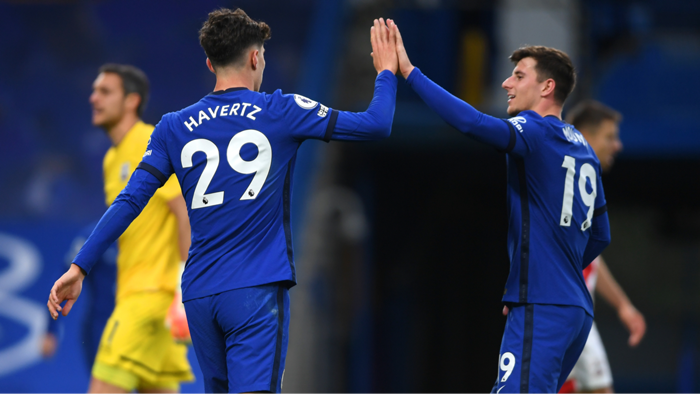 Mason Mount has recalled his first encounter with Kai Havertz, which took place in an Under-17 match between England and Germany in 2015.

Mount scored a sublime goal for England in that match, with Havertz closely marking him but unable to prevent the goal.

Havertz and Mount have now been reunited as team-mates at Chelsea, after the former joined last summer from Bayer Leverkusen.

“It was my first game on TV, playing against Germany, so it was a massive game for us at Rotherham's stadium,” Mount told England's YouTube channel.

“I can't remember the final score, but I did score a goal in the game and that's what I remember - it wasn't too bad a goal.

“Kai Havertz, my team-mate at the moment, is actually in the video.

“Not many people know this, but he is the one that grabs my face. I've spoken to him about it at training and we had a good laugh about it.

“He actually remembered it as well. It was funny. Now he's going to get exposed now, so everyone is going to know. But great memories to score for your country.”

Both Mount and Havertz rose through the youth ranks to become full senior internationals for their respective countries, with Mount earning 13 caps for England so far and Havertz making 10 appearances for Germany.

Mount rose through Chelsea's youth ranks as well, starring on loan for Derby County in 2018-19 before becoming a regular for the Blues last season.

Havertz developed in Leverkusen's academy, making his senior debut in the 2016-17 season before eventually moving to Chelseain a £70 million ($96m) transfer prior to the current campaign.