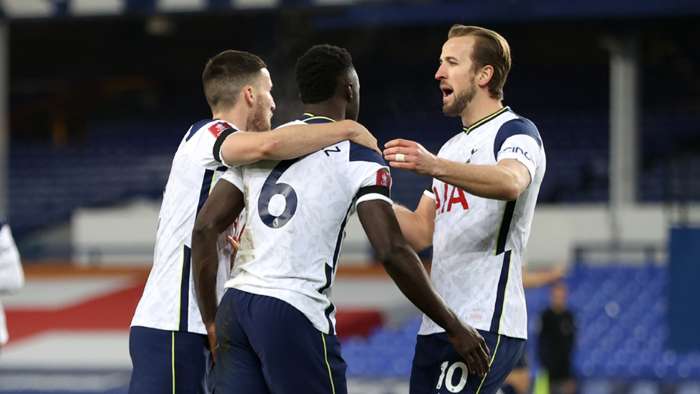 Harry Kane is now on his own in second on Tottenham's all-time scoring list after netting in Spurs' FA Cup clash with Everton.

The England star's goal came in the 83rd minute, with Spurs down 4-3 in the final moments of Wednesday's fifth-round match.

Kane's goal forced extra time in what was one of the most free-flowing games of Jose Mourinho's managerial career.

Kane’s finish washis second in as many games, having previously been level with Bobby Smith in second place following Spurs' 2-0 win over West Brom.

With Wednesday's goal, the forward surpassed Smith to take second on his own, havingnow scored 209goals in 318appearances in all competitions for Tottenham.

The England captain is now within 57goals of Tottenham’s all-time record scorer Jimmy Greaves, who hit 266 strikes in 379 appearances between 1961 and 1970.

Martin Chivers and Cliff Jones round out Spurs' all-time top five, having scored 174 and 159 goals respectively.

Mourinho is normally known for his more pragmatic approach, with the Portuguese manager's teams usually leaning more towards the defensive side, buton Wednesday he saw his team caught up inone of the most free-scoring matches of his career.

In what was the 981st game of his managerial career, Wednesday's meeting with Everton was the first time a Mourinho side has both scored and conceded at least four goals in a single game.

It was also only the sixth time a Mourinho team has ever conceded four times,and the first time in a cup match since Chelsea's 4-2defeat to Bradford City in January 2015.

Davinson Sanchez was responsible for two of Spurs goals as he became the first Spurs defender to fire a brace in eight years.

The Colombian defender scored just three minutes into the match and then again in the 57th minute, with a goal from Erik Lamela nestled in between.

With those two goals, Sanchez became the firstSpurs centre-back to score a brace since Jan Vertonghen's double against Liverpool in the Premier League in March 2013.