Klopp's greatest challenge: How can Liverpool save their season? 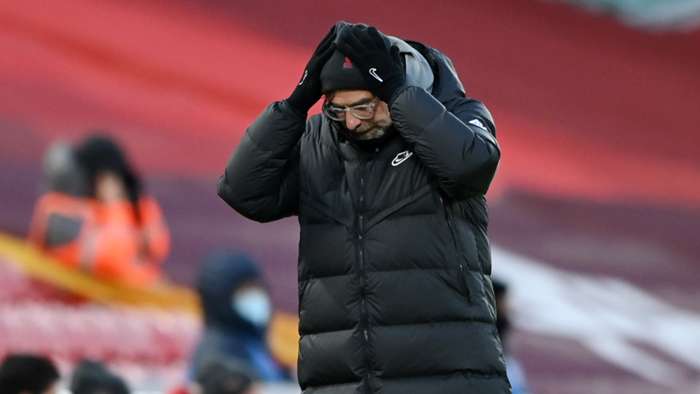 So, where do Liverpool go from here then?

Going, going, gone, and in quite brutal fashion.

Just because pain is self-inflicted – and it certainly was against City - doesn’t mean it hurts any less. Jurgen Klopp may have seen “a really good football team in red shirts”, but the sad reality is that a season which promised so much is turning into one long nightmare for the league champions.

Where do you even start with it? Injuries dominate the story, of course, but Liverpool’s decline has been alarming, whichever way you slice it.

“Bad champions,” Roy Keane called them on Sunday, accusing Klopp and his players of “believing the hype”. Ignore him and his insight-free grandstanding if you wish, but you can’t avoid facts. And the facts don’t make for pretty reading.

After 23 games, Liverpool are 27 points worse off than at the same stage last season. They are 10 behind City – who boast a game in hand for good measure – and have lost three successive home games for the first time since 1963, when Everton were champions, City were in the Second Division and Roy Hodgson was a fresh-faced 16-year-old dreaming of a career as a tough-tackling defender.

They were top of the league at Christmas but they’ve imploded since, dropping 18 points in their last nine Premier League games. They were also dumped out of the FA Cup by Manchester United in that time, just in case you wanted a little salt for the wounds.

As things stand, they face a fight just to finish in the top four. City are gone, away and over the hill. They’ll be champions in May, no question. Even allowing for the events of the last 12 months, it will take something strange to stop them.

Liverpool’s battle, then, is with United and Leicester above them, and with the gaggle of teams congregating below them – of which Chelsea, under new boss Thomas Tuchel, look most threatening at present.

“We knew this at the beginning of the season,” said Klopp on Sunday. “You don’t go to the Champions League by being in the top four spots from the first matchday to the last. It’s something you have to fight for.”

Every week is big at Liverpool, but the next two are huge. The Reds travel to third-placed Leicester next Saturday and then host seventh-placed Everton the following weekend. In between is the first leg of their Champions League last 16 tie with RB Leipzig – a game that will be played in Budapest due to German Covid-19 regulations.

They’re certainly capable. Bad form and low confidence do not equal bad players or a bad manager. The talent within that Reds dressing room is vast, and so is the character – whatever the likes of Keane may say.

Klopp was right to seek positives in his side’s first-half showing against City – and in fairness, it is not deflecting to point out that they were very much in the hunt to win the game before Alisson Becker’s aberrations in the final 20 minutes – but it would be nice to see a bit more joy in Liverpool’s football.

They look like a team – and a manager – who stopped enjoying their football some time ago at the moment.

Maybe that’s understandable, given the injuries and the illnesses and the pressure and the fact that they still, remember, have yet to truly enjoy the fruits of that long-awaited league title.

They waited 30 years for that, and when it finally came their fans were not there to celebrate it with them. Don’t underestimate the impact that has had on these players, or on Klopp, for whom the theatre and the romance of football has always been its biggest selling point.

The manager has made mistakes of course – he made them on Sunday, for sure – but he has suffered too. He deserves to be supported as well as questioned. Nobody gives more, and nobody could have done what he has done for the club in the last five years.

Of course he must find the answers, and he is paid handsomely to do just that. He needs to recalibrate his defence and repair his midfield, rebuild his players’ fractured confidence and get them smiling again. Boy would it be nice to see them smiling again.

There’s still plenty to play for, and things are never quite as bad as they feel in the aftermath of a defeat. That, then, is Liverpool’s challenge, Klopp’s challenge; to block out the noise and power through the pain. Fifteen league games and a Champions League tilt. Ample opportunity to turn a miserable campaign into a happy one, a successful one.

Don’t think it’s possible? More fool you. He’s turned them from doubters to believers before, remember?

Now he has to do it again. It might be his biggest challenge yet, but he'll relish it. Liverpool’s title hopes may be over, but their season isn’t.